To complement the major exhibition Picasso & Modern British Art at the Gallery of Modern Art One, Sin Fin Cinema presents ‘Inspiring Modern British Art’, a special film section devoted to British artists as part of GOING BACK TO REALITY – Portraying Pablo Picasso on the Canvas in Motion, launched at Tate Britain.

This film programme contains a carefully selected body of films, which reveals the lesser known aspects of the Spanish artist’s life and highlights all those essential elements that have been distilled from his works influencing later generations of British artists such as David Hockey, Henry Moore and Francis Bacon among others.

We will be screening David Hockney on Modern Art (46min) directed by David Rowan and Pablo Picasso: The Legacy of a Genius (89mins) by Michael Blackwood. The screenings will be introduced by Virginia Pablos, Director and Founder of Sin Fin Cinema. Introduction from 1.45 – 2pm, then first screening 2-2.45pm; second screening 3 – 4.30pm.

The most highly publicised British artist since the Second World War, David Hockney was born in Bradford, Yorkshire, on 9 July 1937. In 1959 he began his studies at the Royal College of Art, London, where he met R.B. Kitaj, Derek Boshier, Allen Jones, Peter Phillips and Patrick Caulfield. Among the visiting artists were Francis Bacon, Richard Hamilton, Joe Tilson, Peter Blake and Richard Smith. In 1960 he saw the major Picasso exhibition at Tate Gallery in London and became instantly fascinated by the artist’s style and techniques. In 1973 Hockney went to live in Paris for a while. He took the opportunity while he was there to work with Aldo and Piero Crommelynck, who had been Picasso’s master printers, and produced a series of etchings in memory of Picasso who had died earlier that year, and who had been one of Hockney’s heroes since he saw the Picasso exhibition at the Tate Gallery in the summer of 1960.

Pablo Picasso: The Legacy of a Genius 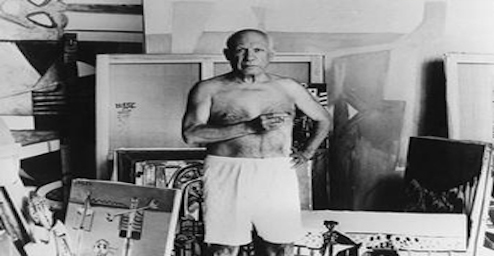 Cast:Dominique Bozo, Anthony Caro, Clement Greenberg, David Hockney, Roy Lichtenstein, Matta, Henry Moore, Roland Penrose, Robert Rosenblum and George Segal
Exploring the breadth of the artist’s achievements through the insights and speculations of fellow artists, close relatives, historians, and critics, the film centers on thirteen key works which vividly represent the major turning points in Picasso’s career. Robert Rosenblum, an art historian and a noted authority on Picasso, introduces us to these key works. Dominique Bozo, founder of the Musée Picasso, visits the places in Paris and the south of France where the artist lived and worked, and discusses the relationship between his milieu and art. Critic Clement Greenberg and Picasso’s biographer Roland Penrose present their views on many important issues in Picasso’s career.

Several generations of painters and sculptors have had to contend with the scope of Picasso’s vision. Among others, Henry Moore, Matta, Anthony Caro, David Hockney, George Segal, and Roy Lichtenstein comment on the ways in which Picasso’s oeuvre has affected their own artistic sensibilities. Pablo Picasso: The Legacy of a Geniusis an assessment of the 20th century’s best known artist and his vast achievements.