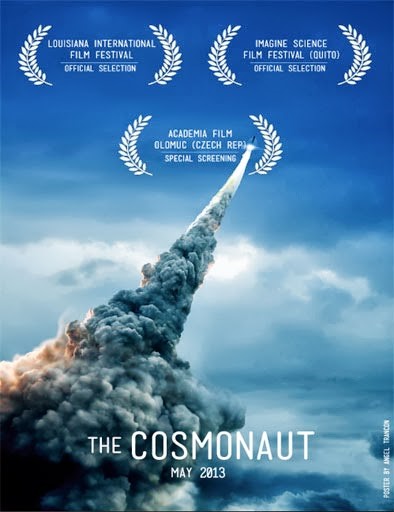 The Cosmonaut plays out a classic love triangle against the backdrop of the Russian space program of the 1950s.  Chopped up and playing with chronological order, the film takes a dream-like approach to storytelling, as if the film is a memory stained with emotion and time.  And perhaps it is.  Perhaps it’s the memory of Stas as he wanders the deserted earth searching for its inhabitants and his former life.  The melancholy of nostalgia hangs over this film, a film about hopes and dreams – the aspirations of a nation in the space race and two men caught up in it, their camaraderie barely concealing their competitive relationship.  Throw in a dreadful accident which almost blinds one of them (Andrei) denying him the possibility of leading a mission to space and a beautiful if somewhat meek woman (Yulia) who both Stas and Andrei immediately fall for, and you have a tale of ambition and jealousy, one as old as time.

The exquisite cinematography takes us through this in dramatic fashion – the retro futurism of the space program centre, stationed out in the green forest, the sunlight glinting through blades of grass.  The framing of the location – bristling with the ‘natural’ – is at odds with the scientific, technology led world of the two protagonists.  Isolating the research centre in such a place works as an interesting juxtaposition – the soft, more fleeting sensibilities of emotion against the hard, clinical buildings and machinery.  In essence this describes the relationship of the gentle, brooding Stas with the more ambitious and ruthless Andrei.  Stas seems more at home than Andrei on the countryside walks the trio go on, and Andrei becomes a figure of ridicule, his stiff manner not quite gelling with wet shoes and rough and tumble.

The film seems to operate in a slightly fantastical realm, its historical verisimilitude compromised by the overtly English accents of its two male leads.  It was hard to discern whether this was intentional or not (most probably it was because this is a partly British production); either way the isolated setting, dreamlike quality of the cutting and camerawork, eases us into this.  Indeed the story operates on two different planes – Stas’ wandering through a seemingly deserted earth – or at least Russia – and the build up to the space mission.  Near the beginning of the film something crashes into the forest and Andrei and Yulia along with the ever present military search the forest for Stas.  So where is Stas wandering?  Is it the far future?  Has a nuclear fallout finally happened?  Or has he somehow found his way to a parallel dimension?  The answers don’t come easily.

One can’t finish talking about The Cosmonaut without mentioning its use of crowdfunding.  There is even an intro before the film thanking the 4,500 ‘producers’ who gave money to the project, a little too much like an advert for a phone network for my taste, but nonetheless not something one sees a lot of; the crowdfunding was so integral to the project that it’s get’s it’s own mention in the very running time of the film.  The film’s website is a doorway to exploring the ‘transmedia’ world of the film and its offshoots (32 web episodes, a book etc).  This is a multi-faceted experience that encourages one to go beyond the initial 90 minutes of watching the film, and boasts ‘a new way to experience stories’.