20 Jan NINE MUSES at the ICA

Playing at the Institute of Contemporary Arts until the 9th February is The Nine Muses, the new film by John Akomfrah, he of Handsworth Songs (1986)fame, which detailed the effect of the Handsworth riots in Birmingham in the 1980’s, and founding member of the Black Audio Film Collective.  The Nine Muses were the nine children of Zeus, lord of the Greek gods, and Mnemosyne, who was the personification of memory.  These nine goddesses were the deities of the arts and sciences, such as Thalia, the muse of Comedy and Science or Urania, the muse of Astronomy.  In his film of the same name, John Akomfrah uses these goddesses as a framework to investigate the immigrant experience in Britain, predominantly from the black point of view, although immigrants from the Indian sub-continent also feature. 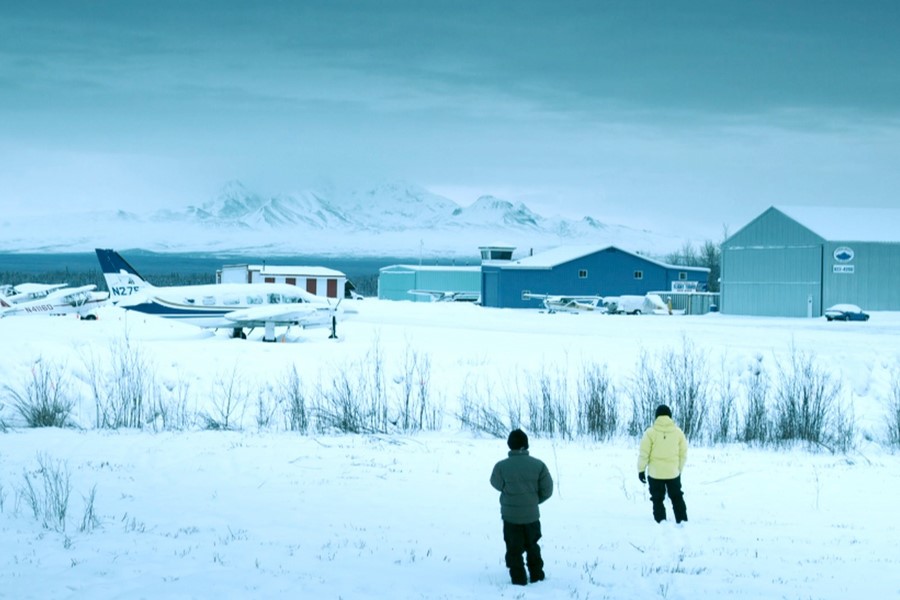 Juxtaposing archive footage with footage shot in the snowy wastes of Alaska, it explicates a life of hardship and dislocation, a search for identity and a yearning for ones homeland.  Three lonely figures individually trudge through an arctic landscape, sometimes stopping and staring out at the primeval wastes.  The figures are hooded, wearing bright, single coloured jackets and goggles; in essence they are faceless, and they march through this frost bitten land looking for an identity, a world to live in.  Interspersed throughout the film are readings from famous literary sources: we get the ‘To be or not to be…’ soliloquy from Shakespeare’s Hamlet, we get James Joyce and Samuel Beckett as well as John Milton and Dylan Thomas.  Sometimes these readings create a dichotomy between image and sound; in one reading a voice celebrates England for being England, while we see images of separation, poverty and pensive looking immigrants, at other times they consolidate what we are seeing, reinforcing the mournful mood of the film.  Just including these quotes creates a dichotomy as the majority of readings are from western, white literary figures.  Did Akomfrah do this on purpose to create an even deeper sense of alienation?  A particularly powerful quote speaks of setting out on a journey to reach a destination, only to realise that the journey itself is the destination.  Like a curse, immigrants in Britain who have come seeking work and a home, a place to build a life, are doomed to be forever journeying, never settling.  Akomfrah chooses his stock footage well to illustrate the permanent outsider status of the immigrant; at one point we see a tall black man crossing the road with his child, behind him white people seem to hold back as they also cross, as if they don’t want to get too close to the foreigner.

Through the stock imagery we journey through the last sixty years or so of the black migrant experience in Britain; old interviews, Enoch Powell’s right wing ‘Rivers of Blood’ speech, Paul Robeson, Leontyne Price singing ‘Sometimes I Feel Like A Motherless Child’ (which speaks volumes in this film).  We get a sense of the jobs that brought the immigrants over here and how those jobs gradually dried up, how racism spread, how holding onto one’s own identity became harder and harder.  Akomfrah shows us an empty boat, half capsized in the icy waters.

The epic nature of the Alaskan landscape segments play well against the more informal reality shown in the stock footage, acting as a metaphor for the immigrants search in this colder, harsher land.  It is a stark landscape of mainly white and blacks, and one that dwarfs the hooded figures, increasing the sense of dislocation.  Even when occupying the same shot the figures are always looking away from one another, never connecting, just as the cars that drive by them seem like they don’t even realise the figures are there; these are forgotten people with no home.  Akomfrah includes a reading of Emily Dickinson’s ‘Eden is that old fashioned house…’ to particularly poignant and quietly tragic effect, expounding the immigrants yearning for a home never appreciated enough when it was lived in.  But the figures in the arctic landscape are not weak, they are searching and their full colour jackets present them as well defined figures against the landscape, strong in their step and never ending in their search.

In a way the idea of the Greek Nine Muses of Arts and Sciences undercuts the sorrowful outlook of the most of the film (there are some moments of happiness, a sense of hope as we see employment, and Arvo Part’s beautiful ‘Spiegel Im Spiegel’ plays over the top, but this soon fades) and yet at the same time suggests the contribution immigrants have made to British society in the realms of music and the arts.  In the films final sequence a reading of Duke Orsino’s ‘If music be the food of love…’ speech from Shakespeare’s Twelfth Night plays over footage of an Indian celebration full of musicians and dancers.  It’s a wonderful juxtaposition to have Shakespeare’s very English dialogue paired up with such an image, and maybe it is an appeal to break down the barriers between the different ethnic communities in the UK, an outcry against the segregation which The Nine Muses consistently illustrates.  It is also a more positive way to end what is a moody, elegiac film.