12 Jan SIN FIN CINEMA WAS AT THE GALLERY SOHO AND GOT THIS!

Posted at 00:00h in Art, Photography by admin 0 Comments
0 Likes

That morning the sky was clear and sunny. The north wind was crossing the meadows, moving gently the smell of the frost. The silence, resounding. Just the tweet of a lark from the distance. Three hours later, forty-seven thousand corpses were spread all over the battle field.

Space is what happens.

Perception is the concoction of our physical stimuli and our psychological background. But space is what is going to happen as well. The potential scene of any event. And he final experience is the conjunction of our physical approach, the simultaneousness of past-present-future presences of the environment, and the projection of our own memories over the scene.

Considering all these premises, space emerges as a tool itself. By disfiguring our physical environment a new sensory scene appears. A process of creation through distortion.

This exhibition -consisting of three installations- is a journey where physical and psychological distortion collide, creating a new territory to explore. 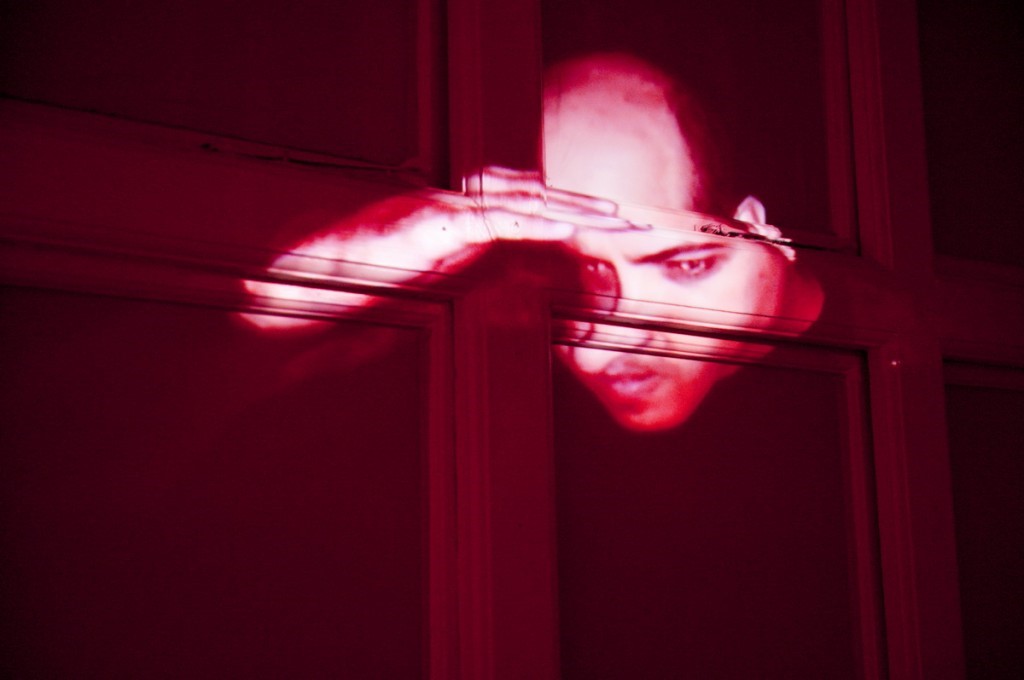 3 seconds captured for 30 days at 3pm

Same heartbeat for life, dramatic ephemeral sensations, external inputs, introspective view. In {3pm} space is what remains, an ephemeral, anonymous and relevant moment building our own deepest cognitive conscience through the privilege of isolation.

Experience: Maybe inspiration is just to apply a mutation of the information that come to us from events in a continuous line of time. So what if we try to catch only certain moments in discontinuous lapses? In {3pm} experiment we’ve tested it, and the result is an experience of introspective view about feelings and thoughts that came to our minds during the observation of these pieces of daily life, the bombing that pushed us to create this immersive installation.

{3pm} is not a space, it’s just a necessary interlude. Inside a small isolation cage, in a luminous red box isle in the middle of a continuous datascape, we find a precise break of continuity.

by Pablo A. Padilla Jargstorf

Mystical experiences are one of the most intense ways of space-time distortion. Hope, faith, visions and ecstasy. Transcendent events in the border of consciousness that launch an undefined and blurry landscape to cross.

This immersive installation dives into a never-ending ascension. Sitting in the waiting room, we begin a journey through a visual and sound experience. A psycho-acoustical travel through constant rising. Space limits disappear during our wait, our eternal wait. Meanwhile, our mind keeps looking for a culmination that never comes.

Every space is the frame of a potential situation. A crime and a birth; a rape and an armistice; a drug deal and the beginning of love. Everything could happen, everything has happened in every single room.

In this installation we move inside a quick sequence of different scenes. We witness a fast progression of lights and soundscapes that define specific situations. A succession of instants, moments and happenings that actually occurred. Space as the stage of life.

Pablo A. Padilla Jargstorf (Madrid 1975) is a composer and architect. From a very early age, he commenced music theory and piano studies. Later one, he started music composition in the nineties. Since his beginnings, Pablo showed special interest in sonorous landscape and focused his career working with textures and sound manipulation, although he never resigned traditional composition using staves.

His relationship with architecture led him into the fiend of sonorous installations, in which he explores space perception thought sound. Currently, his most recent works are still focused and developed in this direction; spatial perception and their relation to sound. His works have been heard in different art galleries like Espacio Fourquet (Madrid, Spain), Espacio Valverde (Madrid, Spain) or the Fundación Sa Nostra (Palma de Mallorca, Spain). As well, he participated in the Venice Biennale of Architecture exhibition and in several events such as the Cívitas Nova Forum (Albacete, Spain), the Project Bartleblom (Madrid, Spain) and the Museo Nacional Centro de Arte Reina Sofia (Madrid, Spain)