03 Jun You Can’t Stop Being Human

A review of ‘The Plague’ by Jack Wormell

Some summers ago I was stuck in an interminable traffic jam going from the French Pyrenees into Spain to board a plane back to London.  The grating slowness of this particular jam (we were stuck on that road for four hours) allowed me to closely examine the no-mans land of roundabouts, service stations, underpasses and agricultural land, which the motorway led us through, as well as the figures that populated it: us in our cars, truckers, and prostitutes loitering by the roadside (cigarette in hand, handbag hanging from their shoulder).  ‘The Plague’ (Dir: Neus Ballús), which premiered a couple of weeks ago at the Berlinale 2013, takes place in such a landscape, an ‘edgeland’ as is the popular term now; neither city nor rural, the area in the film is for most people a passing landscape, glimpsed as they speed (or in my case crawl) through the fields and the concrete.  This transient aspect is established early on when one of the central characters, Raul, walks from the quietude of his flat onto his balcony where an expansive motorway full of speeding lights dominates everything beneath him.  And indeed there is a prostitute in the film – Maribel, who stands all day in the unforgiving sun, next to a fast road, waiting for customers.  But work is scarce; ‘I can’t live on 20 Euros a day’, she tells Lurie, a Moldovan immigrant in a similar financial position as her.

Everyday Lurie cycles along the motorway to his job on an organic crop plantation, run by Raul.  Down the road is a home for the elderly where Filipino immigrant Rosemarie tends to new arrival Maria, a local old woman, whose deformed body and wonderfully expressive face embody the films push and pull between everyday physical irritation and small pleasures.

In some ways the film reminded me of John Steinbeck and his contained location and cast of characters in ‘Cannery Row’ – with added dust from ‘The Grapes of Wrath’.  But ‘The Plague’ is a much slighter affair than Steinbeck’s impassioned pleas and anguish.  The film is free of any grandiose epiphanies – the fact that director Neus Ballús uses non-actors who she worked with for four years before filming a thing, seems to allow ‘The Plague’ to work in more modest ways.  Through its lens of the post-recession (yet always present?) capitalist diaspora of immigrants struggling to make ends meet, and using subtly expressive players (Maria Ros is particularly affecting) ‘The Plague’ adeptly pin-points the minutia of work, and, in turn, life, focusing especially on the physical irritants: Lurie’s ear wound which keeps re-opening after his wrestling training, Maria’s constant somatic discomfort caused by her twisted and humped body, Rosemarie’s gruelling daily walk to work across the fields under the sweltering sun.  These hardships create an equality between the characters, bridging age, gender and race: Ballus cuts from a shot of Maria squirming in bed to a shot of Lurie undergoing hard physical training for his wrestling match – both bodies, old and young, stretched and contorted.  In another scene Lurie and Maribel talk despairingly about how little money they have – he a muscle-bound young man, and she a shrinking middle-aged prostitute.  Later, Maria says ‘I have no home’, echoing the positions of Lurie and Rosemarie, who are literally far from home, in a foreign country. 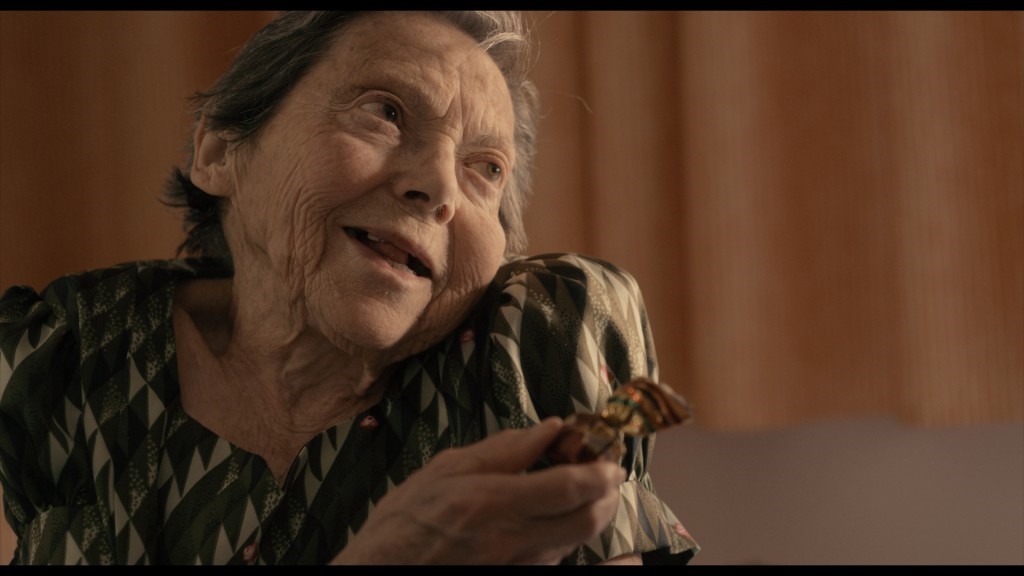 The director (of which this is her first feature) gently counterpoises these chafing moments with instances of respite and pleasure – particularly memorable is Maria eating her chocolate and Raul, after ripping down his useless crop in a moment of quiet, impotent resentment, going for a swim in his pool – you can almost feel the cool, calming water from your seat.

The struggle of existence is transmitted to us most strongly by the aforementioned unforgiving sun, which is referenced throughout.  It occurred to me while watching ‘The Plague’ that there might be a discussion to be had about beauty hiding malignancy in the film’s digitally shot hand-held imagery.  While loose and naturalistic, it also gives a smooth sheen to these already sun-kissed people, making even the most liver-spotted OAP with respiratory problems shine.  I didn’t grasp the relevance of the extreme close-ups of the white flies that are destroying Raul’s organic crop (the plague of the title) when first shown, I assumed that these were just beautiful shots, put there to emphasize a quiet moment.  When some scenes later I realized what was going on, the shot began to hum with malevolence in my memory.

Life is unpredictable and tough and the characters in the film are on the receiving end; Raul has to take extra factory work because he can’t sell his crop, and will possibly have to let Lurie go.  How one deals with this, and indeed how one retains their humanity is a question apparent in the latter half of the film.  A fellow Filipino colleague of Rosemarie’s returns to work to find a resident she was fond of has passed away.  ‘He was like a grandfather to me’, she says, before being rebuked by Rosemarie.  You can’t get attached, she tells her; to do this work, which Rosemarie doesn’t enjoy, you have to suppress yourself. Rosemarie is soon in tears; her ability to suppress herself failing.  Later on, in what I found to be the most overtly powerful scene in this subdued film, Rosemarie tells Maria that if she is to get on with life in the home she must forget her old independent life; she mustn’t spend all night thinking.  ‘But how can I not think?’ Maria replies, ‘How can I not be me?’

‘The Plague’ doesn’t draw the audience in close to it’s characters, throughout we feel like we are observing them rather than getting to know them, but as the film reaches it’s close, a poignancy becomes more apparent; with it’s quiet brevity ‘The Plague’ skilfully weaves a simple story of people who can’t help but be human, and even though it offers no answers to the hard and often sad lives on the screen, it left me with a feeling of hope for the human spirit.